December 22, 2010
Last night I took the girls to the Chamber of Commerce to see Santa Claus. (Santa had originally planned to come to the park gazebo, but it hasn't hit 50 degrees here since December 1, so the town decided that the Chamber office would be more comfortable.) He was a very nice Santa and spent a long time with each child; which was nice for the child of the moment but not so nice for those standing in line. However, we were the the third family to show up so we didn't really have to wait that long.

He and Mrs. Claus, who was sitting beside him in a gingham bonnet, were both a bit judgey when it came to wish lists, though. The girl ahead of us asked for a cell phone. "A cell phone? How old are you?" Santa asked. The girl said she was 10. "I'll have to think hard about that one," Santa said. Mrs. Claus interjected: "Honey, you don't need a cell phone until you start to drive." The girl looked a bit upset. Mrs. Claus leaned over and said to her mom in a loud whisper: "She really doesn't need a cell phone, you know!"

(Let me say that in theory I agree with the Clauses about the cell phone business, but you're supposed to be able to ask Santa for anything! That's the point of Santa!)

So when Mallory asked Santa for an ipod, he frowned a little bit. "I'd also like a webkinz," she said hastily. "Now that I can do!" he said. 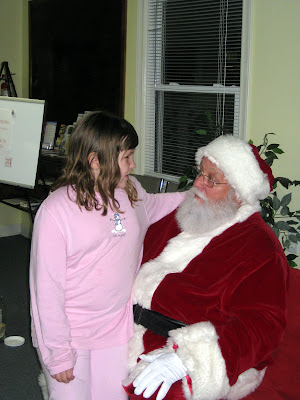 Santa had no reservations about Phoebe's wishes: Girl legos and Polly Pockets. Mrs. Claus told me that she loved Phoebe's name. 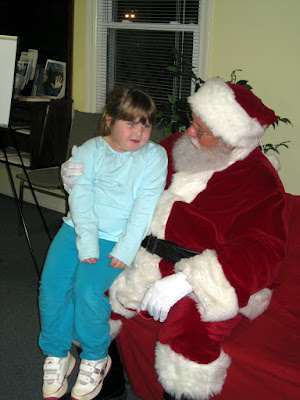 I think both my good little girls will be satisfied on Christmas morning. 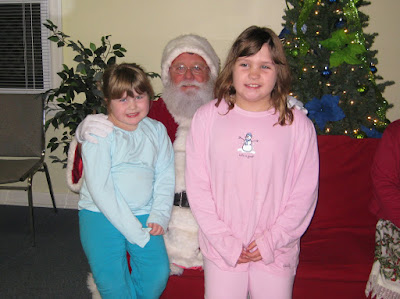 aimee said…
He was a little judgy. I hope he softens a bit before Christmas morning for Mallory's sake. ;)
12:28 PM