April 02, 2012
As part of a Social Studies project that has overtaken our lives, Mallory is conducting a tour of cupcake bakeries in the Triangle area. The research involved in this project, as you will imagine, has been quite tasty. Yesterday we went to Chapel Hill to visit Sugarland, a bakery featured on Food network which also happens to be right across the street from where Chris and I first met.

Chris and I kept mentioning this kind of thing -- This is the restaurant we ate at on our first date! This is where I'd pick your mom up after class! Our first apartment was right down that street! -- and each time the girls would say, "Ewwww!" It's unclear why details of our past life disgust them so greatly. "If your daddy and I had never met, and had never dated, you wouldn't have been born," I've said numerous times. Mallory, however, seems to find the whole concept of dating very unpleasant, and I think Phoebe just doesn't like to contemplate a world before she was in it.

We parked at the Turtles -- a free lot so named because of the giant mural on the wall facing it: 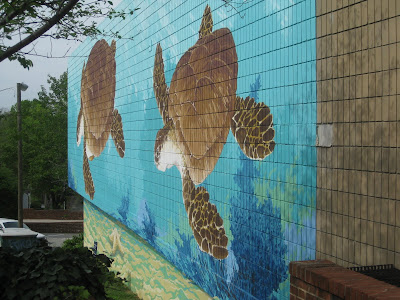 Phoebe was disappointed that this was just a mural and not the outside of an aquarium. The Turtles was where, one evening, right after I'd parked and gotten out of the car, a drunk guy came into the lot, got into his own car (which was perpendicular to mine) and yelled out the window, "You'd better hope I don't hit your car!" and then proceeded to back out and do just that -- he slammed into my car, then drove forward, and then reversed into my car again. Chris ran over and started yelling ferociously and defended my honor (and my car from further damage). Good times.

We ate lunch at Pepper's Pizza (where, in fact, we had dinner right before seeing an REM concert on November 10, 1995 -- which we do consider our first date) -- it's a divey kind of place where all the waitstaff have piercings and tattoos and the seats and tables are decidedly vintage. Delicious pizza, though. 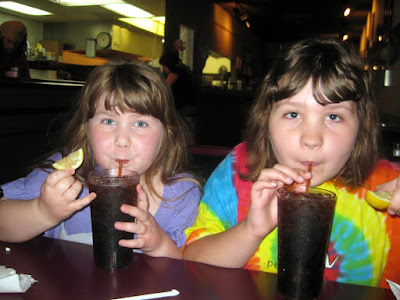 We then walked down Franklin Street to the comic book store, where the girls wheedled me into buying them stuffed animals, because apparently we can't go anywhere without buying a stuffed animal. 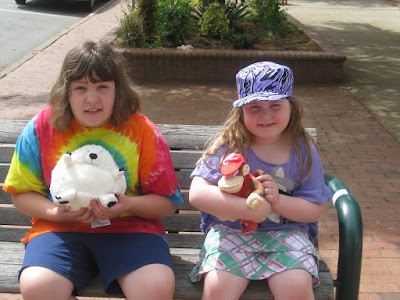 Then on to Sugarland, which was immediately impressive to the girls because of the mosaic in front of their entrance: 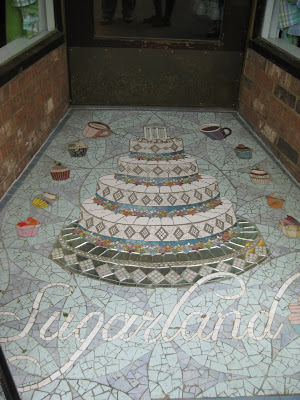 It was, indeed, a land of sugar, showcasing some really amazing cakes like this one: 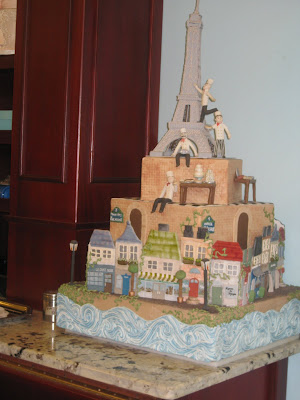 That's a cake! A real cake! What the!

They also have gelato, which I'd never tried before but which is now my favorite thing. I had coconut and the girls had vanilla and we all agreed it was divine. Apparently they make frozen margaritas and daiquiris with the gelato and I must go back to try one of those. The cupcake -- we split a Red Velvet -- was merely okay. 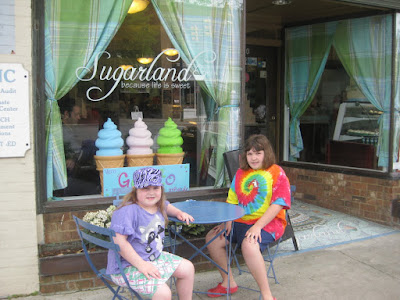 Then we took a walk through the UNC campus. I should've taken more pictures because it was just gorgeous -- UNC has a pretty campus anyway, but with everything freshly blooming and kind of damp from recent rains it was just lovely. 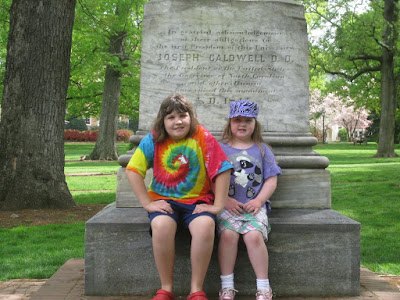 Phoebe kept asking Mallory, "Do you think we should be Tarheels or NC States?" as though those two colleges were the only options. (And yes, the choice should have been Tarheels or Wolfpack.) Mallory said she wanted to be a Tarheel; Chris replied that she'd have to get really good grades. After a few moments thought she said, "What if I don't go to college at all and just work at McDonald's? That would be okay, right?" I said, "Not if you want to have a house and a car and to be able to afford to have a family." She said, "I'll just find someone to buy those things for me." Ha! Good luck with that, kid.

I have to say, though, that as we left the prettiness of the quad and got into the section of campus that I'd spent all my time in -- the graduate school buildings, the library, the gross dining hall where I'd eat my lunch -- the fond nostalgia I'd been feeling turned into something else. In fact, as we passed by Greenlaw Hall, where I'd had most of my classes, I just had this feeling of oppression and dread -- much the same as I'd felt during my two years as a graduate student, in fact. (At least, that's how I remember it.) Mallory and I went into the library because I wanted to find my thesis, but I couldn't figure out how to work the computers, so we just kind of wandered around for a few minutes. The library is not a pretty building, it's depressingly industrial and gray, and I had unpleasant memories of the boring job I had there (Interlibrary Borrowing, can I help you?) and the hours I spent at a desk on the 6th floor, taking notes and writing papers. Ugh. I'm sure I did enjoy some parts of getting my degree -- surely? -- but on the whole I just remember feeling weighted down the whole time, much like this girl with all the books: 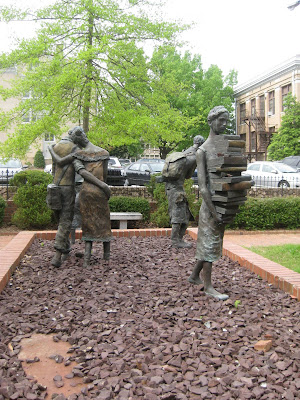 As we walked back through campus to the car, I found myself wishing, again, that I'd pursued another course of study, that I'd done something different with my life. I thought of the advice I would give my 18-year-old self, if only such a thing were possible.

Then Phoebe complained that her feet were hurting, and I said, "Maybe you didn't wear good walking shoes," and she said, "No, I think I just don't have very good feet," and I laughed and felt glad, after all, that I've ended up where I have.

Karen said…
Gelato is yummy. Sounds like you had a good day.
4:53 PM

aimee said…
I think you ended up where you were supposed to. This is something that I have struggled with off and on for years, but I know I wouldn't want to change a thing.
4:37 PM