My dog is a plumber 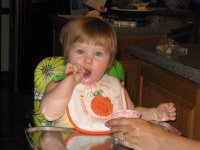 Today Mallory asked me if she could go into outer space. "Sure, " I said, "but you'll have to become an astronaut first." She wrinkled up her nose and said, "Can girls be astronauts?"

I said of course, but I'm wondering why would she think they couldn't? I'm hoping the reason is benign -- for example, because Buzz Lightyear is an astronaut and he's clearly not a girl. We've certainly never told her there were limits on what she can do as a girl, and I don't think she would've heard that at school or even on TV, not in this day and age.

In fact, I don't remember ever thinking there were things I couldn't do because I was a girl, and I grew up simply decades ago. The Free to Be album really sunk in, I suppose. (I should let Mallory listen to that...it would be a nice change from Sesame Street and Yorrie Berganer (that's Mallory-speak for Laurie Berkner). My problem is that I decided what I wanted to be at a very young age and stuck with it way past the point of practicality and now here I sit, chest-high in student loan debt, with a Masters in English and a job in web design. And I actually think I know, now, what I want to be when I grow up, but it's going to require a few more years of school, which is a bummer because a) I don't like school and b) I don't have the money for school. Sigh. Advice to the young: Listen to your parents when they tell you that you shouldn't major in English. They're not just killing your buzz.

PSA for the Day: Do not buy Kaboom Bowl Blaster toilet cleaner. It's this powder stuff that's supposed to foam up in your toilet and magically scrub away all the ick and grime and residue. It doesn't work. And not only does it not work, but it also releases a fine powdery mist when you pour it, which mist enters your nasal passages and eyes and stings like the devil. Bad stuff.

ART for the Day:
When my mother-in-law gets Phoebe down from her high chair after lunch and says, "Phoebe, look what a mess you made on the floor!", Phoebe toddles off to the broom closet and fetches the carpet sweeper. How exciting to think that I might have a little cleaner! This doesn't happen at my house because of our dog, who is more than happy to clean up after the children's mealtimes.

Mom said…
First of all, I love your blogs! Second, what do you want to do when you grow up? I really think that you need to submit some of these to some parenting magazine for publication. They are certainly good enough!

aimee said…
I think they should require high school grads to take 2 years off so they can figure out what they really want to do. I certainly did not figure it out in college and changed my major several times. I actually still don't know what I want to be, so I am very happy you know what you want to be! :) I also think school should be free. If wishes were pennies...sigh.

PS-Is this our mom? Or Chris' mom? Just wondering... She's right-your blog rocks! (sorry, I just watched Gilmore girls and I say cheesy things after I watch it!)
11:48 PM

H Noble said…
I don't know what I want to be either. I guess at 28 with two degrees that's okay to say. I don't know how to tell my mom though. Guess I'll just keep working and living my life and paying off student loan debt till I figure it out.
Holly

P.S. If you want the crazy lady to stop commenting on your blog, Krista, it won't hurt my feelings, but I am going to keep reading it because it is very insightful stuff!
7:27 PM

H Noble said…
Thanks A- just thought Krista might think its weird since she doesn't really know me.
Holly
9:12 AM

aimee said…
Yes, Krista the tai chi/chai tea confusion was funny but remember when I thought Johnny Cash was with River Phoenix when he died? Ha! Man, I was on a roll on vacation, wasn't I? :)
10:24 AM