December 28, 2009
That's the number of miles we drove, there and back again. The trip was long. The girls were surprisingly un-whiny. The portable DVD player helped. The interstate is a boring, boring road to travel. The interstate on-and-off ramps in Alabama, Mississippi, and Louisiana are surprisingly complicated. The convenience store bathrooms in these states feature condom vending machines with really very explicit descriptions of their wares, which make you wish that your 8-year-old did not know how to read. 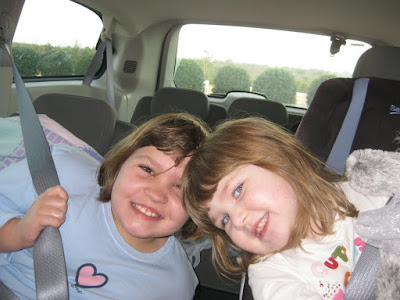 I drove the whole way; Chris was ill and kept going into coughing paroxysms which would have made him dangerous behind the wheel. I only allowed myself to look at the GPS mileage countdown and the clock at the end of a song. Songs generally last about three miles; that's 817 songs.

It was a long way.

The Great Wolf Lodge was lots of fun with plenty of activities to keep the children occupied and to keep the grownups chasing after the children instead of sitting and talking with one another. Mallory would have stayed in the water park the entire 72 hours we were there (although she now says that her favorite part was winning a game of bingo in the Kids' Club). Phoebe and my niece Isabel became inseparable best friends; they never left one another's side and also never argued. (I felt bad for Mallory, who was left out of this lovefest; therefore I spent a lot of time swimming with Mallory when I could have been lounging pool-side instead.)

The girls could not walk by this bear statue, outside the ice cream shop, without climbing on it: 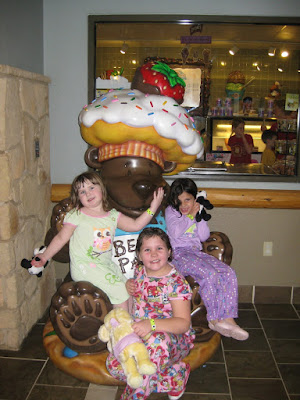 There was a creepy robotic sing-a-long in the lobby: 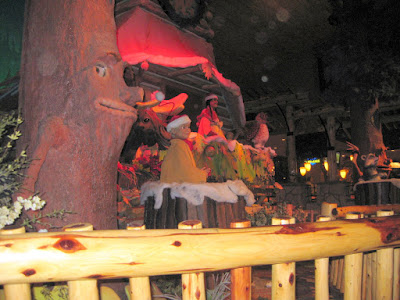 Here are all the children together: 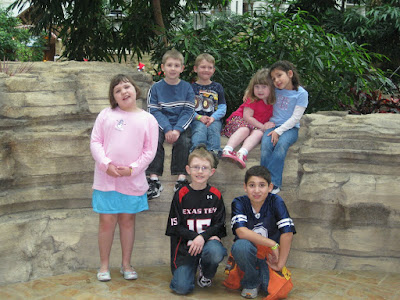 Then we came home and Christmas happened. I was too tired to enjoy it that much, but the girls were happy with their bounty on Christmas morning. I don't have those pictures on hand, however. Maybe tomorrow.

aimee said…
I am glad you got a picture of the girls and that bear. Ha! It was hilarious, them running to it everytime we passed!

Next time, all we really need to do is find a place with a big room so all the kids can play their ds players and then we can talk. Seriously. :)
6:48 PM

Karen said…
I agree with Aimee. I took a picture of the boys playing their ds players on the first night and remember Seth saying that we could have gone to a Motel 6 with a swimming pool! How right he was.

I also feel that I spent little time with you and your family and you are the ones that I hadn't seen in a whole year! Since I didn't spend much time in the water park itself, I missed seeing you and Mallory specifically!

I do think that the kids had fun. I don't remember hearing any cross words from any of them. I did miss the idea of having them at my house, but I didn't miss the marathon cooking that I would have done!
10:48 AM