As an anniversary present to ourselves (12 years! We rock!), Chris and I decided to take a morning and go, sans children, to Universal Studios. He wanted to see the Marvel Superhero stuff; I wanted to see the Wizarding World of Harry Potter, which had just opened two weeks before.

I overheard Chris telling a friend of his that Universal lacked the magic of Disney, and this is true; but it was very visually appealing. It had six or seven clearly demarcated sections – Superheros, Comic Book Alley, Dr Seuss Island, Jurassic Park, Harry Potter, and I’m forgetting one other – and they were all very cool. Here are some shots of the superhero area, which are not good pictures at all, because I took them as we were leaving and I was so hot I had lost the will to live, but you get the idea: 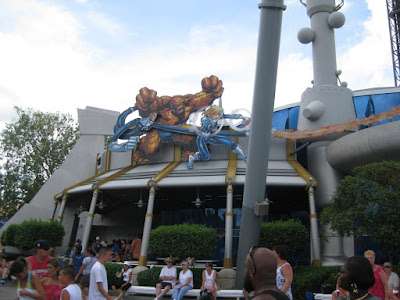 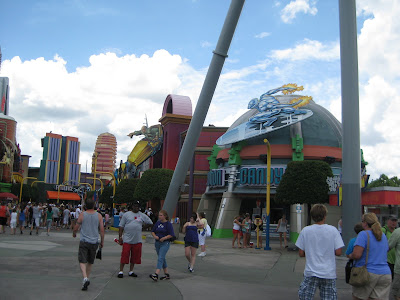 We hopped right in line for the Spiderman 3-D Adventure ride, in which you are a Daily Bugle reporter who gets to leave your desk: 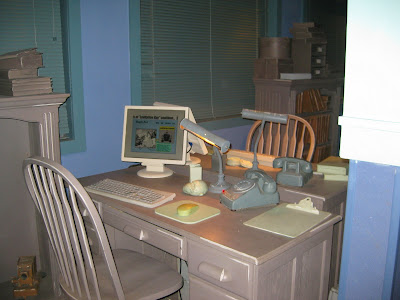 And go on a frantic chase after bad guys, or something. It was a wild ride. You’re in this car thingy, and you get thrown all around on this track, sometimes up, sometimes sideways, sometimes high in the air, and at the same time, you’re whizzing by these 3-d screens, and sometimes Magneto or whoever jumps right in your face and blasts you with hot air, and sometimes Spidey saves you in a giant web. Chris can actually tell you the whole story; I was just trying to hang on. I was, in fact, kind of squealing like a girl and clutching Chris’s arm the whole time, marveling that Chris himself seemed so stoic and manly – until the ride came to a stop, and I looked over to see that Chris was perfectly green. “I think I’m going to be sick,” he said; he felt nauseous for about an hour afterwards.

So we proceeded through Comic Book Alley to Jurassic Park, where I saw a man holding up a sign that said: “Wizarding World of Harry Potter – Entrance.” I knew we were on the other side of the park from HP land, so I approached the man and said: “What?” He confirmed – the line just to enter the HP area started with him, and stretched all the way through Jurassic Park. “It’s about an hour wait from this point,” he said – this was just to enter the area, forget about riding the rides or getting a butterbeer.

I was quite put out by this. We decided to go elsewhere for a while, to see if the crowd died down. We chose the Jurassic Park River Adventure ride, which had only a 5 minute wait (because everyone else was waiting to get into HP world, obviously). This was a “flume” ride in which you get chased by velociraptors and whatnot, and end up plummeting down a cliff and getting soaking wet. This meant that for the rest of the day, we had clammy underwear. Yay!

Even so, the HP line had lessened when we were done with the dinosaurs. We probably only had to wait about 10 minutes before we got to Hogsmeade, and it looked great: 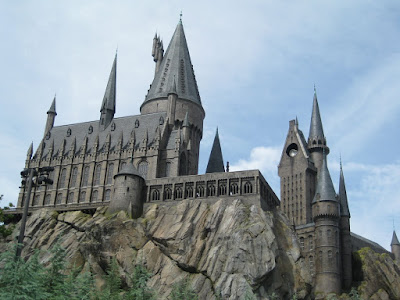 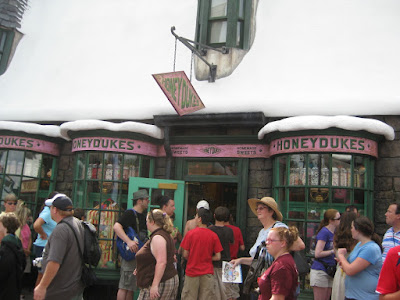 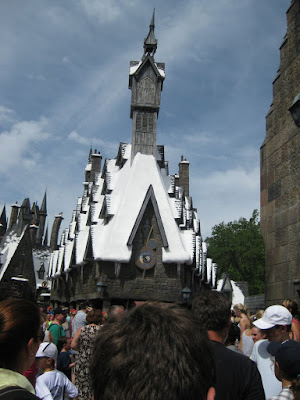 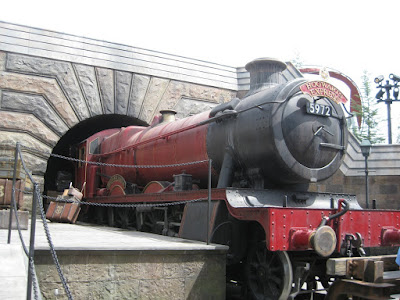 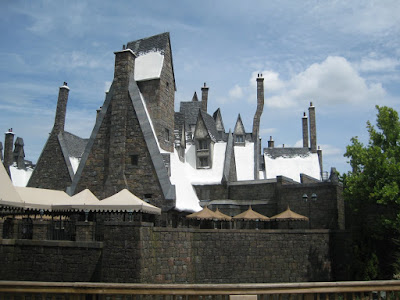 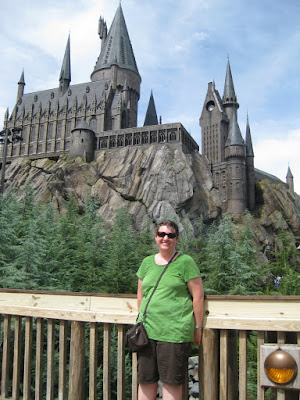 As you can see, though, it was absolutely packed with people. The streets were very narrow, there was no room to walk, and lines of people waiting were stretched every which way – you couldn’t even tell what people were waiting for. “What is this line for?” I asked one woman, and she said, “I don’t know…I think it’s a gift shop.” So, I never got into Ollivander’s Wand Shop, or Honeydukes, or Zonko’s; I never got a glass of pumpkin juice.

As for the rides – the section has two roller-coasters, which I didn’t care about, and the “Forbidden Journey of Harry Potter,” which I totally wanted to get on – but the wait was over two hours, which was a bit much even if you are an HP nut. So we left Hogsmeade, filled with bitterness and despair (on my part), and went to eat lunch (horribly expensive and tasteless burgers).

Afterwards, I decided to try my luck again, while Chris went to take a closer look at the superhero section. The crowds in HP world had died down considerably. I approached the Forbidden Journey ride and heard an attendant say that the wait for single riders was only 30 minutes. Score! The line takes you through a couple of rooms in Hogwarts, and there are talking portraits and even a talking Sorting Hat – however; the only things they say are, “Please keep your arms and legs inside the vehicle at all times,” which was a bit disappointing.

A short time later I boarded the ride, which is one of those where your feet hang down and the car moves on a track attached to the back. You go along kind of placidly for a minute, through a Hogwarts corridor, and then suddenly a hologram of Hermione (the movie Hermione, that is) appears, and she warns you to hold on tight, and then suddenly you are off. You fly along with Harry and Ron on their broomsticks, and you chase a dragon, and you soar over the castle parapets, and then you plunge into a cavern and see the giant spiders, and then it’s suddenly freezing cold and Harry is yelling at you not to look at the dementors. Then suddenly you’re in a Quidditch match with Draco Malfoy taunting you and trying to knock you over. You go backwards, and sometimes forwards, and you go really high up in the air, and then plummet down, and you twist and turn and gyrate. Sometimes the car tipped frontways and you’re just dangling there, praying that the seat belts don’t snap. I honestly thought I was going to die.

It was the most fun I’ve ever had in my life.

Satisfied at last with my HP experience, I caught up with Chris, who was meeting with some old friends: 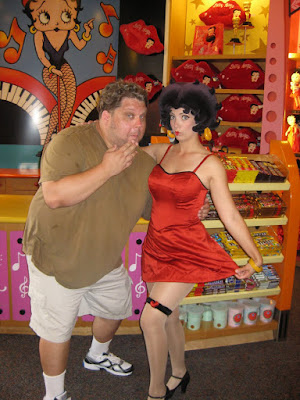 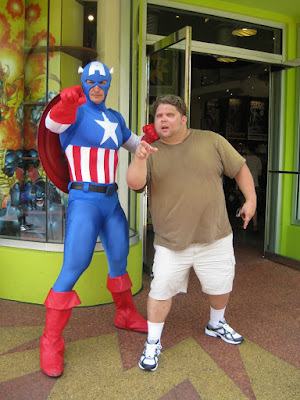 He was miffed at me for riding the HP ride without him, until I told him it was like the Spiderman ride, only ten times worse. So, we bought a few Spongebob souvenirs for the kids and headed back to the hotel. So long, Spidey! See ya, Harry! And so forth.

Our day was not over -- we were off to Disney Hollywood Studios that afternoon. I'll tell you all about that tomorrow. (Bet you can't wait!)

And I am glad HP wasn't a total disappointment for you.
11:28 AM