July 17, 2010
Wow, it's taking me a long time to finish this. Does anyone even care anymore? I hope that someday my children appreciate me preserving these memories in such loving detail.

So: On Wednesday we went to SeaWorld -- we meaning everyone except Chris, who hates dolphins. Ha! Not really.

The children were dragging a bit, right at the start: 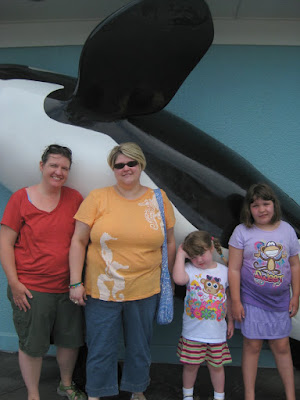 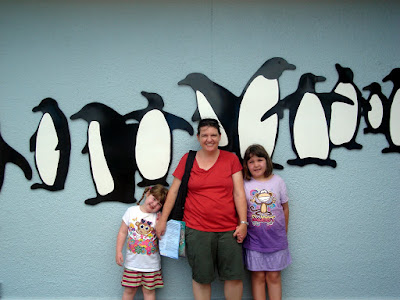 Incidentally, if you're thinking to yourself, hmm, Krista has the same scraped-back-hair and no-makeup-face in all of these pictures, didn't she even attempt to groom herself better down in Orlando? The answer is, no, I didn't. It was too hot. That is what I looked like all week.

On to Shamu stadium for the Shamu show: 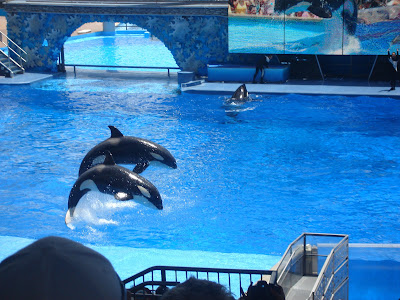 Amy took that picture, plus some other really cool ones; I couldn't get out my camera because Phoebe was collapsed in a sweaty, whiny heap on my lap throughout the whole show. Mallory, however, was extremely impressed and immediately declared her intention to be a whale trainer when she grows up.

Next we went to the kiddie ride section of the park, where I thought a ride on a Sea Creature carousel might cheer Phoebe up: 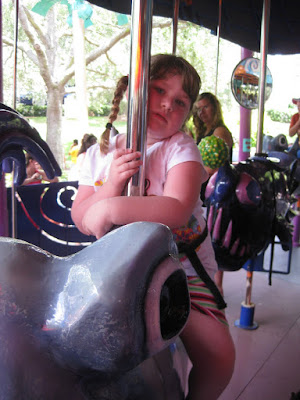 She did, however, love the Shamu Express roller coaster: 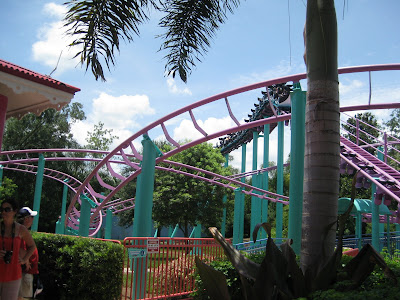 Then she and Mallory wanted to try Happy Harbor, which was this enormous, 3-story play structure, with netting and tubes and whatnot for kids to climb up and around on. Basically, you send your kid up on a rope and just hope that one day you'll see them again. There mine went: 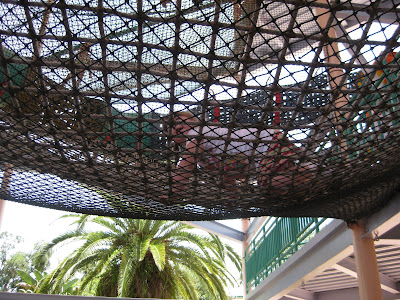 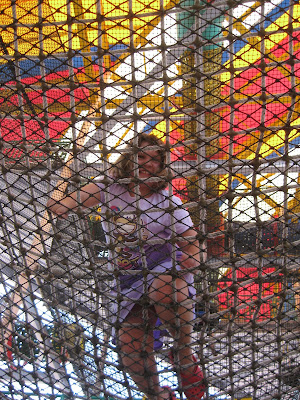 I sat down in the shade to wait for them. Twenty minutes later, Mallory ran up, red-faced and drippy with sweat, and said: "Mommy, there's a problem with Phoebe, she's way up on top and she's crying and I can't figure out what's wrong with her and I AM SO HOT I'm not going back up there and I really need a drink of water." I groaned, gave her a drink, and sat her down with strict instructions NOT TO MOVE AN INCH FROM THIS SPOT, and climbed up to find my other child. There she was, at the tippy top of the structure, wailing because her sandals had come off and she couldn't get them rebuckled.

This area of the park was hereafter known as "Unhappy Harbor."

A bit of ice cream got everyone calmed and cooled down, and we went next to the Arctic Zone. We got on a ride that simulated a helicopter ride across the North Pole, complete with close encounters with polar bears and walruses, and near-death by avalanche. Then we walked through the pleasantly cool arctic exhibit, where we saw (real!) beluga whales, walruses, and a sleeping polar bear. The kids got to climb in a polar bear cave, and I was intrigued that part of the exhibit was set up to look like the remains of one of Sir John Franklin's ships -- I'm not sure why I didn't take pictures of that.

Outside the Arctic pavilion, the kids posed for a picture on a polar bear: 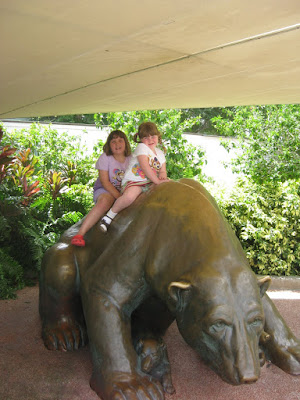 ...and as I was helping Mallory get down, I slipped and she fell and I fell on top of her and there were tears and bleeding and a security guard had to stop and make sure we were all right. After that we left the statuary alone.

Next stop, the best part of the day: 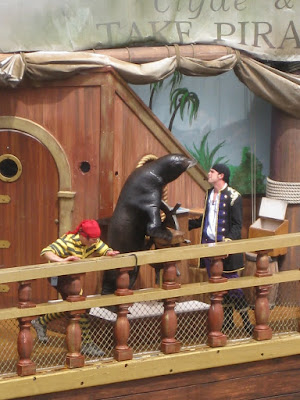 The Clyde and Seamore show! 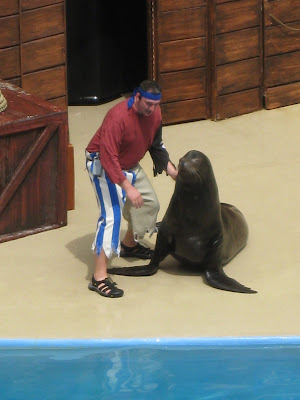 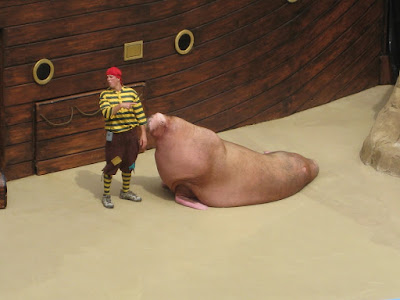 How funny was this show? Very funny, that's how. I wish I'd gotten a picture of the otter, who kept zooming across the stage. How do you train an otter to do such funny things? I otter ask somebody. Ha! Ha! Ha!

After the show, Phoebe wanted to ride one of the big thrill rides, but the wait was too long. She settled for (another) stuffed animal, and we decided to head to the car, as it looked like it was going to rain. On the way, though, we passed the sting ray pool, and stopped by to check them out. 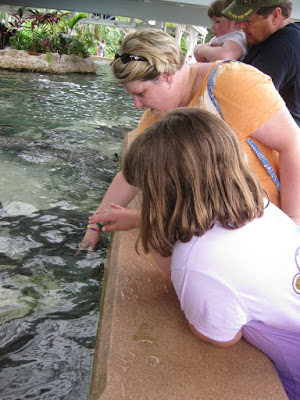 Sting rays are velvety and slimy all at the same time. Amy bought some fish heads to feed them, but the girls were too squeamish for that (as was I, in fact). 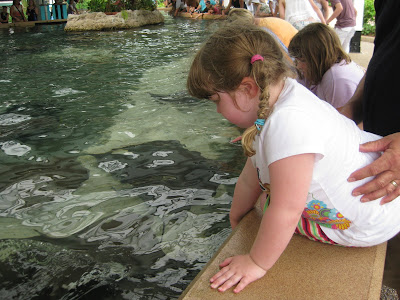 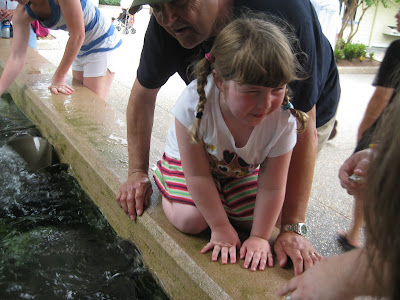 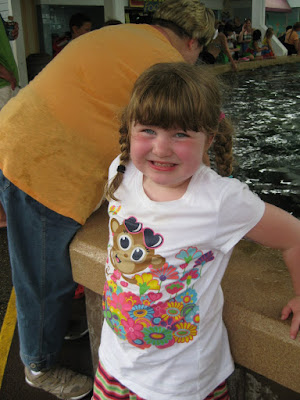 (Doesn't she look cute in her pigtails?) 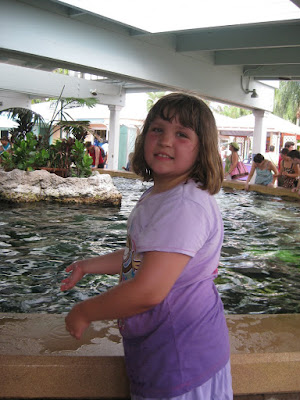 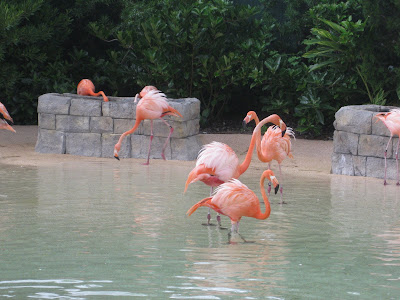 So that was SeaWorld. We missed a lot there -- but I think of all the parks we went to, the heat bothered us the most here. It would definitely be worth a repeat visit...maybe on a nice Tuesday in February.

I LOVE those sea lions, though. 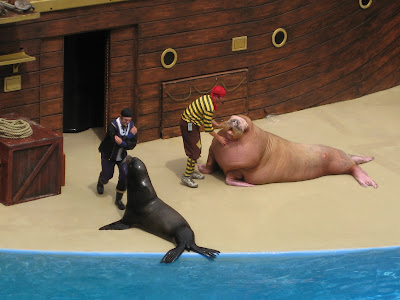 aimee said…
Sea World in San Antonio was the same for us. The day we went it was the hottest day on record for San Antonio, ever. Or that is what they said.

I care about your recaps. I just haven't been around to check them. But now I am!
11:24 AM