Why it's best to walk in front of her

Phoebe stops abruptly to demonstrate how she can balance on one foot.

Phoebe stops abruptly to examine something on the floor.

Phoebe stops abruptly to ask what is ten plus one.

Phoebe turns and embraces your knees.

Phoebe announces that she's hungry and must have some Club crackers immediately.

I say that maybe she can have some crackers if we ever arrive in the kitchen. Which at this point seems doubtful.

Phoebe runs runs runs, on her tippy-toes, with her arms hanging straight down except for a slight upward tilt of the wrists. Her hair bounces. The old line about the distant drummer -- Phoebe hears that drum loud and clear, and she follows its beat. Even if that means she's constantly getting stepped on. 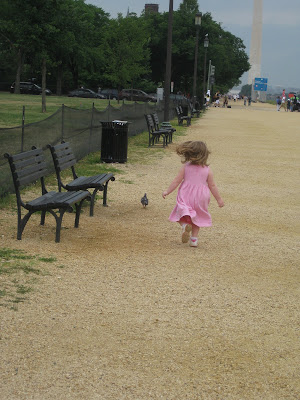 aimee said…
Love the picture. It fits perfectly with your story.