The Princess and the Rock Star 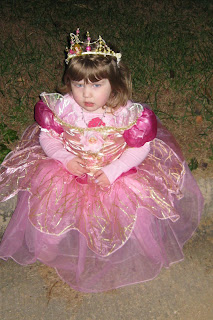 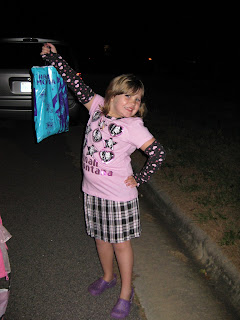 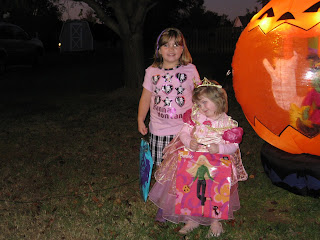 A good time was had by all on Halloween night, except for the handful of hapless children who tripped on the tether cords of our giant blowup pumpkin. The next day, I told Mallory she could have one piece of candy after lunch. She hunted through her bag for, seriously, about twenty minutes. "I just can't decide," she said, "I want something really really delicious." I sympathized. That's exactly how I feel when I go down the cereal aisle. So many choices, you'd think there one be at least one cereal that would jump out at you and make you think, Hey, that is exactly what I want to eat for breakfast tomorrow. That rarely happens, though, so I settle for the same old Rice Chex or Cheerios. Life is hard, isn't it.

Speaking of choices, Mallory asked me today to guess who her new boyfriend is. "Oliver," I said, naming a Hannah Montana character. "Mommy," she said. "I figured out that if I pick a boyfriend, it has to be somebody real," she explained. "I had Drake Bell as my boyfriend all last year and he never showed up! So I'm not going to have any more TV boyfriends." I said that was very wise, and didn't mention my ongoing crush on Daniel Day-Lewis (sorry, Chris).

aimee said…
Wow, she figured that out fast. I can't tell you how long I waited for Michael J. Fox or Kirk Cameron to show up at my door. ;)

Anonymous said…
Mallory looks so grown up in that costume! Wow!! She is smart about the boyfriends, although imaginary ones are much easier on mothers.

H Noble said…
Beautiful princess and glam rocker! Too bad for the stumblers. Maybe you should have had Chris on the lawn with those flashlights they use on the runway to direct foot traffic. :)
1:11 PM