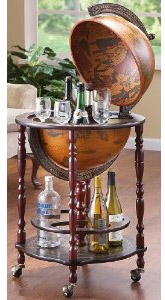 There was a miniature golf course in my grandparent’s house.

There were, in fact, lots of cool-if-kitschy things in my grandparents’ house. There were swinging saloon doors between the kitchen and the master suite. There was a toilet seat made of transparent plastic, with ticket stubs from horse races embedded therein. There was a globe wine bar (pictured!). There was a mounted goat head (the goat was named Bucky) on whose antlers my granddad hung his golf caps. There was a stuffed pheasant whose chest feathers were smooth as silk. There was a kitchen bar of green marbled formica and swively kitchen chairs of red pleather. There was an automatic ice dispenser on the refrigerator, which was a rare and awe-inspiring thing in the 1970’s. There was a mirrored tray holding bejeweled perfume bottles with atomizers in the guest bathroom. There were two huge oil paintings – one of my aunt, with beautifully frosted hair, holding a Pug, one of my older sister as a toddler sitting on a John Deere tractor. The fact that these oil paintings came from Japan, where my uncle had them commissioned from photographs while he was stationed there during the War, made them hopelessly exotic. There was also a swimming pool with a cabana in the backyard, although the tragedy of my childhood was that its foundation was cracked and thus could not be used for swimming (it was a pretty great place to roller skate, though).

But the best thing was the golf course. It was a three-hole putt-putt course, complete with minor obstacles – a hill here, a curve there. The course took up about three-quarters of the room; on the fourth wall there was a rock waterfall that ended in a little pool, tinkling musically. The course was surrounded by plant bedding, mulch and gravel that hosted all kinds of growing things – ferns and flowers and spider plants and a huge rubber tree (which we called “the beanstalk”) that grew up to the ceiling and then curved back down toward the floor – really it was as much a greenhouse as a golf course; and in fact now that I think about it, my grandmother always referred to the room as “the flower garden” (am I right about that, Mom?). My grandmother had quite the green thumb, but I can’t imagine how much time it took to keep all those plants alive.

I’m not sure if I ever actually putted in this room, but it was the perfect place to hide, or to spy, or to enact elaborate “let’s pretend” scenarios with stuffed animals or Barbie dolls. It was fun to just poke around – there was always a surprise to be found: a ceramic frog with a crooked crown; an African violet; a fuzzy cactus. I still remember the earthy flowery smell of it; I still remember how it felt to run through the room in bare feet – the prickliness of the Astroturf of the course, the cold smoothness of the paving stones by the waterfall.

It was completely normal to me, this golf course in my grandparent’s house; I remember how gobsmacked Chris was when he first saw it. I don’t know – I’ve never asked – why my grandparents decided to build it, what the thought process was that led to its existence. Was it just the natural combination of Granddad’s love of golf and Grandma’s love of gardening? My grandparents moved out of this house a few years ago; from what I understand it’s now in a state of disrepair and not likely to be occupied any time soon. (Who would buy a house with a golf course in it?) I wonder what happened to all the plants; was the beanstalk chopped down and removed? It makes me sad that I’ll never see it again, that my kids will never play there, that I don’t even have a decent picture of it. What I wouldn’t give, to run through it one more time.

aimee said…
Your description of it is perfect. I can picture it in my mind, reading your words, although Casey, my cousin and I would play "Dukes of Hazzard" with cars there, not barbies. We would also build card houses there because it was the perfect place. I never saw the rock waterfall working, which was sad to me, as was the whole pool situation. When I took the boys there with my mom, I just wanted them to see it, just once and my disappointment that they couldn't because of said disrepair, was profound. I don't know what grandma called the room but I just know it was about the coolest thing ever.
4:06 PM

Anonymous said…
The goat was actaully naed "Buske" after one of Dad's friends who was also hard headed and smelled bad.

Michelle said…
I too have a bar globe on my wish list! We always talk about the smell of Bon's house. How familiar and homey it is and how somehow it got transferred to the house in town. She once gave me a shirt and three washes later it still smells like Bon's house. I love this post, I lived this post.
5:32 PM

Karen said…
What a great post! Yes, she did call it the flower garden. The last time I saw the inside of the house most of the plants were quite dead, but still there. It was sad because the house was a neat house with a neat history.
5:40 PM

Chris said…
Some people prefer to furnish their homes based on a particular style, or based on matching items from a catalog or Ikea or something. Others simply fill their homes with things that have special meaning, or with things they like, style and aesthetics be damned. I prefer the latter. These types of dwellings might never make it into an issue of "Better Homes And Gardens", but more often than not they are fascinating to behold. My Grandma and Grandpa Francus' house was like this, with every nook and cranny filled with exotic and crazy artifacts and trinkets, each one with it's own story, each one a reflection/extension of my Grandparents' personality and histories, both individual and shared. Your grandparents house struck me the exact same way...I loved it the first time I walked in there. In fact, I immediately felt as though I was in a weird alternate version of my grandparents house. I remember thinking how cool it must have been to be able to walk out your door and waltz over there whenever you wanted; I could see how that place would have been the coolest house ever for a kid to spend time in. Not just the putt putt course, but the whole "feng-shui" of the place just exuded a sense of fun, much like your grandparents themselves.
10:38 PM

Chris said…
It is a shame that the house is vacant and in disrepair...I'd love to see Mallory and Phoebe tearing around in there...they'd go nuts in that place.
10:43 PM

Krista said…
Dad, I knew I'd get something wrong. I remember now that it was "Buske," although I didn't know that the goat was named after a person.

Michelle: You're right about the smell! The funny thing is that my other grandmother's house also has a very distinctive, but completely different, smell. I don't think my mom's house smells like anything particular...I wonder if my kids do?