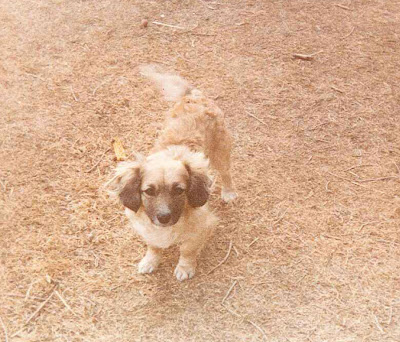 Spunky is a dog who showed up at our house (out in the country) one day and hung around with us intermittently. Sometimes he'd stay on our porch for weeks at a time, and sometimes he'd disappear for several days and then come back. Other times he'd come home with a little black dog, a female, whom we named Josie. (I suspect there were many Josie x Spunky puppies at one time as well.) One Christmas Day we came home from my grandma's house to find Spunky in our yard, all bloody and limping. He'd either gotten into a fight with another dog or kicked by a cow (did I mention we lived on a farm?). We brought him inside and cleaned him up and let him sleep by my sister's bed all night. I went to sleep crying, sure that he'd be dead in the morning, but no, he was perfectly fine when the sun came up. And then the day came when he disappeared and never came back. I like to think that he found another family to temporarily adopt. He was a good boy. 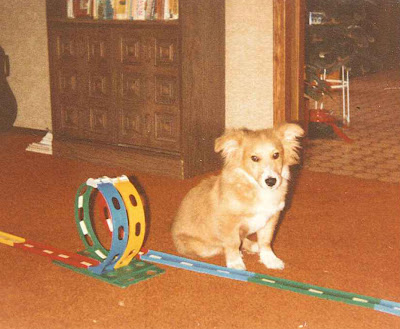 Rusty was the only dog we ever had who got to stay in the house, because we got him as a puppy in the wintertime. I was the one who talked Mom into getting him, so he was mostly my dog. Every night I had to lay newspapers all over the floor of our utility room, and then rig up a gate so he would stay there til morning. This was kind of a pain. But, on weekend mornings I'd wake up early and bring him to my bedroom and we'd have all sorts of fun. Rusty was hit by a car and killed when he was still very young. It was the first time I had to deal with the death of a pet. Rusty was a very good boy. 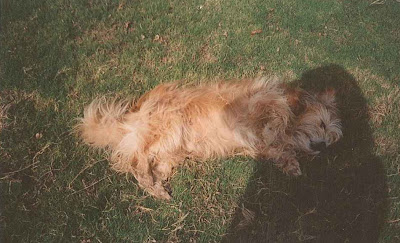 I wish I had a better picture of Noodle. He was a half-brother of Rusty, and we actually brought him home with one of his littermates, a black dog named, originally enough, Blackie. Blackie was also hit by a car when he was two or three years old; Noodle was the only dog we ever had with the sense not to chase cars. He was a happy dog. He loved to go on walks with my mom; he could be off doing who knows what, no where in sight when she started out, but somehow he could sense when she was walking and he'd always zoom along and catch up with her. He had a very long life for a farm dog; he died just a few weeks after Aimee and Casey left for college. It was as though he knew his job -- watching over his kids -- was done. He was a very very good boy.

These are two calves we had to feed: 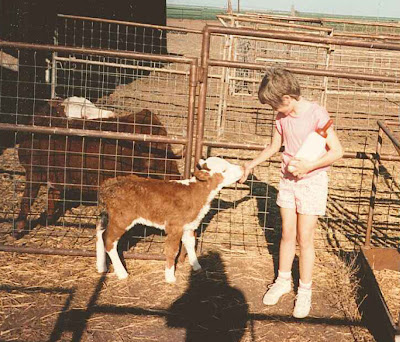 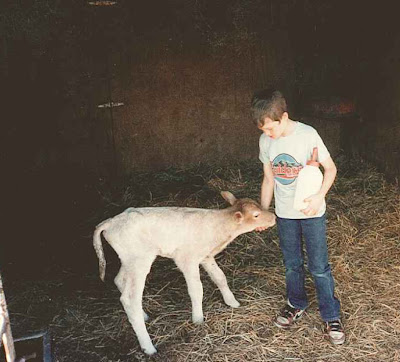 The thing on my brother's head was not a pet (ha!): 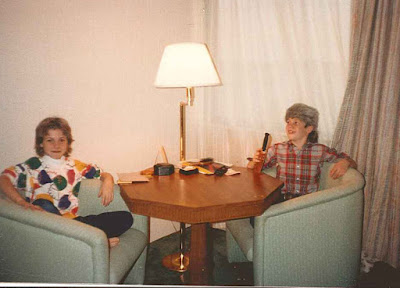 And this is especially for Aimee: 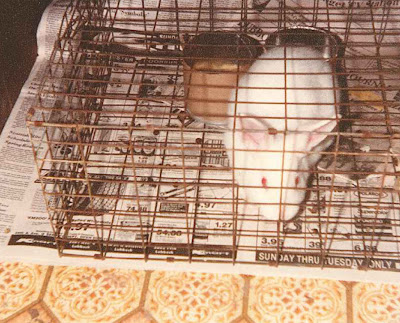 Chris said…
I remember Noodle from the first time I ever went home with you to meet your family. You went through a lot of dogs on that farm...
3:02 PM

Anonymous said…
I can't believe you remember all this. I had forgotten about Josie. Was it really a girl? Good pictures. Spunky was a good dog.

Karen said…
I have always thought that Noodle died of a broken heart.

aimee said…
Oh Mom! Don't say that! I am already bawling my eyes out-thank God I didn't check your blog when I was in Longview-they would have thought I was crazy.

And thanks for giving me a laugh with the evil bunny.

H Noble said…
I remember Noodle too. Good dog. Laughed out loud at the bunny for Aimee picture. Ha!
12:37 AM